Picture of the week: Gormley’s view of Sao Paulo

Art meets public consternation. According to reports, people have reported the statues as potential suicide jumpers. 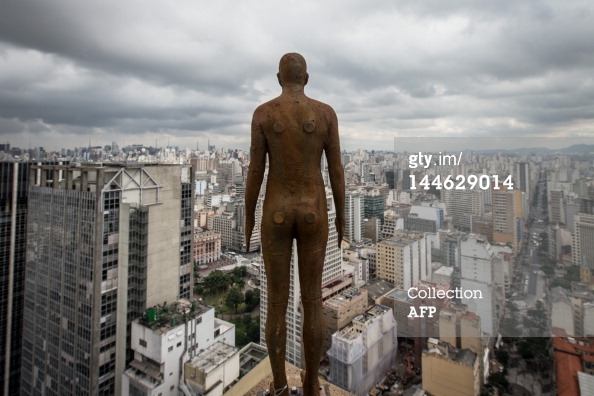 The Getty watermark is a stroke of genius. Here’s why.

I had an article in today’s FT (June 1, 2012) on Getty Images watermark (Getty shifts with new stamp of ownership), but in the interests of journalistic fairness, I couldn’t say exactly what I thought. So here’s what I think.

In brief: the company has changed the watermark from an obstructive, possessive gesture to a helpful, open one. It is not longer a simple stamp across the image, but a cleaner box with a short-form URL and a photographer credit.

It’s a stroke of genius, in my view. Why? Well, there are several reasons I can see. In no particular order: END_OF_DOCUMENT_TOKEN_TO_BE_REPLACED

Sounds good, doesn’t it? The billionaire geek of Facebook vs the once bad-boy of BritArt.

But in what context? What are you on about, I hear you ask. It’s simple really. What actually counts in this world: ideas, or execution?

Yesterday I saw an ad on the train for the Judge Institute in Cambridge (my home town) quoting Alfred North Whitehead:

The vitality of thought is an adventure. Ideas won’t keep. Something must be done about them.

That was in the 1880s. So what has this got to do with Zuckerberg or Hirst?

A lot, in fact. If you think the idea is all important, and don’t care about execution, then Hirst is your man. You can “own a Hirst” which has never been touched by Damien. Who cares about the execution? It’s the idea. Hirst gets the credit, the money, the process is immaterial. This was recently discussed in the FT’s arts podcast – the artist as businessman.

But if it’s all about execution, then you’re in the Facebook camp. It wasn’t the first social network, or the second. Facebook, if you believe the movie, wasn’t even Zuckerberg’s idea. It was brain child of the Winkelvoss twins. But, as the character says in the film, “if you were the inventors of Facebook, you’d have invented Facebook.” Even if Zuckerberg didn’t come up with Facebook, he executed it. It’s his. He is the one worth x billion, rather than with the $65m settlement.

If you are a Zuckerbergist, then Hirst should be worthless – he just has an idea of the art. Someone else puts it together. Where’s the execution? It’s just mindless reproduction.

Somehow in this world both Zuckerberg and Hirst are very very rich. One is richer than the other, by a big factor, but that’s not the point. Both models seem to co-exist. Maybe this is to misrepresent Hirst. Perhaps his big idea is about the endless reproduction, about pushing art as a brand, and in so doing retains both the idea and the execution of the idea, even by not using his own hand. What does he do? The idea is to market the idea. It’s a meta-economy.

Or perhaps we were all moving that way. Martin Wolf, my colleague and the world’s most influential financial journalist, summed it up in 2007:

Neoclassical economics analysed economic growth in terms of capital, labour and technical progress. But, I now think, it is more enlightening to view the fundamental drivers as energy and ideas. Institutions and incentives provide the framework within which the development and application of useful knowledge transforms the fossilised sunlight on which we depend into the stream of goods and services we enjoy.

If you have an idea, it’s worthless. If you execute that idea, you’ll make money (assuming it’s a good one). But if you can sell that idea over and over again, and yet retain the rights – well, that’s priceless.