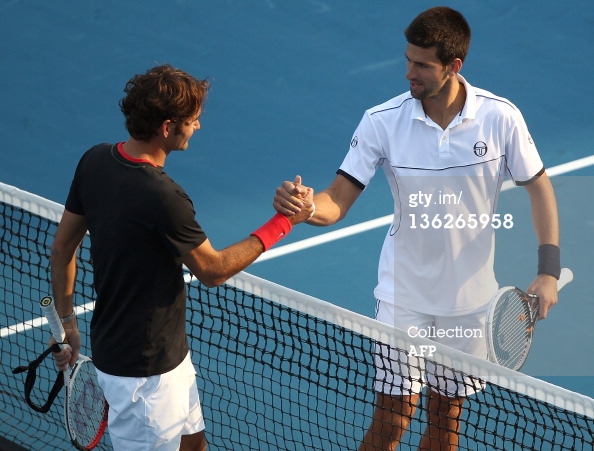 On Friday, Roger Federer and Novak Djokovic line up in the semi-final at Wimbledon. Although they have never played each other on grass before, a semi-final meeting has a very familiar ring to it.

Well, that’s because it is familiar – and a bit too frequent, when you look at the odds.

In fact, since Djokovic broke into the top 4, it is amazing how many times he and Federer have been placed in the same half of the draw. For those unfamiliar with how it should work, here it is:

So, to recap: for since half way through 2007, for each of the four slams in a year, it has been a 50:50 chance that Federer and Djokovic should end up in the same half of the draw.

In fact, since Djokovic has broken into the top 4, (which has coincided with an ever-present Federer in the top 3), they have been in the same half of a grand slam draw 16 times out of 21.

To get 16 heads flipping a coin 21 times is not good odds. For what should be a 50 per cent chance, it is running at over 76 per cent. That looks suspicious.

Overall, unless my statistics is letting me down, the chance of 16 out of 21 coin tosses coming up heads is 0.0097 – that’s the binomial probability. Here’s the calculator I used – enter 0.5, 21 and 16 to see the results. That’s not very likely.

[Aside: They are such good players, that out of the 16 times they have been in the top 4 seedings and drawn in the same half, they have managed to get to play each other 9 times, with one or both players going out before the semi stage 7 times.]

Why would you want to play Federer and Djokovic in the same half? To get Nadal in the final, that would be one possibility, to try and engineer more Nadal-Federer finals. Or, more likely, it’s just chance. But a few more Federer-Djokovic semis, and perhaps the players should be hiring statisticians as well as dieticians.

Here’s the data in a Google spreadsheet.

It could almost be a sport itself – debating who is the greatest sportsman of their sport / generation / all time. The great names are easy to think of – Pele, Federer, Bradman, Woods. Or is it Maradona, Laver, Tendulkar, Nicklaus?

The arguments will rumble on, but a few statistical caveats should always be kept in mind. One is: You can’t compare between sports very easily.

Here’s an example which has made me furious. In a recent issue of Prospect magazine, Jay Elwes tries to make the case for Indian cricketer Sachin Tendulkar being the best sportsman in the world. Fair enough, a good candidate I’d agree. But just read the following paragraph:

At which point, a question arises: can Federer, perhaps the greatest ever tennis player, be measured alongside Tendulkar? One instructive comparison is the distance by which each leads the trailing pack. Federer has won 16 Grand Slam tennis titles. In second place is Pete Sampras on 14, which makes Federer 14 per cent more successful than his nearest competitor. Tendulkar has scored a total of 32,803 runs for India in Test and one-day internationals combined. Ponting, in second place, has scored 25,769, meaning that Tendulkar has scored 27.3 per cent more again than his nearest rival. His lead is nearly twice that of Federer.

I’d like to say this is a small blip, but it’s not. It seems to be the main data to buttress his argument. What’s wrong with this? In no particular order:

I could go on, but you get the idea.

Cricket and tennis lend themselves to some fascinating statistical analyses. But this is not an “instructive comparison”. It’s grossly misleading, shows little thought, and does the debate about great sportsman no favours. Prospect magazine is a superb publication, but this is not one of their better articles.

In a good but not great Wimbledon final, Novak Dkokovic beat Rafael Nadal today. I was supporting Nadal (actually I am quite a big Nadal fan). So I did what you might call an “emotional hedge” and put a bet on Djokovic to win.

Some people see this as heresy. I’m not sure why. For no moment did I stop supporting Nadal. But after the match had finished, I thought – hey ho, cheer up, you made a few bob.

So my mood was altered. Here’s the e-ticket from BlueSquare:

Very nice. Not bad odds either, for a 2-horse race, where the outsider had only lost one match all year. So a £50 return improved my mood. Not a fortune, but a decent sum for a small wager.

And then I thought – what about Nadal? Is he happy? I doubt it. He has lost the title, and the number one ranking to Djokovic. I’m sure he’s not having a crisis, but he certainly won’t be happy. Yet he’s just earned £550,000 today as runner up.

That’s 11 thousand times my winnings today. He’s definitely not 11,000 times happier than me, that’s for sure. Yes, it’s all relative. But I think Nadal would be unhappy today if he got £2 million of even £20 million. His game is now measured in titles, not money. He’s already earned over $41m in prize money alone, let alone sponsorship, so he’s set for life.

Which leads me to two thoughts. Money doesn’t make us happy – we all knew that really, so let’s move on to… why are sportspeople paid so much? And so much more than inflation? Nadal as runner up has just won more money than Lleyton Hewitt did in 2002 – less than 10 years ago. (Hewitt got £525,000 for winning, Djokovic just got £1.1m today).

Wimbledon has increased prize money this year by 10 per cent for most stages of the tournament (including winner and runner up), and by 8.5 per cent overall. This is much higher than inflation. Why do they need to do it?

Is there a prize money race with other events? Does prize money equal prestige? Hardly. Other tournaments offer a lot, but you would have thought the grand slams – which have a joint committee – would conspire not to push up prize money too high.

It also seems horribly similar to the corporate world, where CEO pay is many multiples of average workers. The winner earns eight times a losing quarter-finalist. I see the logic in halving the money as you go down the field, but a quarter-finalist has won four matches, compared to the winner’s seven – more than half the entertainment and effort for 1/8th of the money.

Is this fair? No. Would the winner be happy with a fraction of the winnings? Yes, I’m sure. So why don’t we change? Why isn’t the money more evenly spread around. It would be interesting to see which players kicked up a fuss.

But then again, I’m quietly chuffed with my £50 winnings. It’s funny what a little money can do.

The limits of sports stats: the example of Nadal and the WSJ

This year in tennis is been all Djokovic and that winning streak. The narrative of sports is always about who is “the Man”, so therefore, Rafael Nadal must be a spent force.

The Wall St Journal have, they think, proved it. In their piece Nadal Looks Surprisingly Human in Paris they look at the stats of Nadal’s first four matches this year, and compare to the years he has won before.

Nadal’s stats don’t reflect a full-blown disaster. But compared to his first four victories in the years he won here, Nadal is spending on average a half hour longer on court and breaking opponents’ serves far less often. All this despite not playing a single seeded opponent so far.

What’s wrong with this? First off, players who are seeded CAN’T meet another seed until the third round anyway, so that’s hardly stunning. Let’s look a bit more at the stats they cite.

His average match length is high, but it was higher in 2006 when he won the title – hardly shocking. The only 2011 stat quoted which is worst in the list is the percentage of return games won – 4 per cent lower than the next lowest. Four per cent, which works out at about 2.5 games on the opponent’s serve that he hasn’t won in 4 rounds – less than a break of serve less per match.

So we have boiled Nadal’s struggle down to about a break less per match from 2006, perhaps two per match from his peak, plus a bit more time on court.

It’s hardly evidence of decline. But stats are like that. They don’t always show what seems evident to watchers and commentators. They don’t show the workrate, the struggle on points, the extra deuces, the attitude. Perhaps those things are there, perhaps we’re seeing what we want to see to fit the narrative. Let’s see what happens from here to the final.

Tennis: A rivalry in decline

Lost in all the battle of the streaks – Nadal on clay vs Djokovic in 2011 – was the fact that Nadal and Federer met again in a semi final on Saturday.

It’s a bit of a comedown for the greatest rivalry * in modern tennis. Nadal and Federer have played two semis in a row now, after previously playing in eight finals straight. Overall, of their 24 meetings, 18 have been in finals.

This is going to happen more now that Djokovic is number 2, and closing in on the top spot. At every big event there is a good chance they will be in the same half of the draw.

While nothing lasts forever in sport, I do still hope they play another big final this year. Strangely, it’s been over two years now that they met in a slam. The last meeting was the Aussie Open of 2009, which was a great match.

* greatest rivalry = based on the seven slam finals contested, two more than the next rivalries of Sampras-Aggasi and Lendl-Wilander; and on the time at number 1 and 2 together in the rankings (most of the last six years).