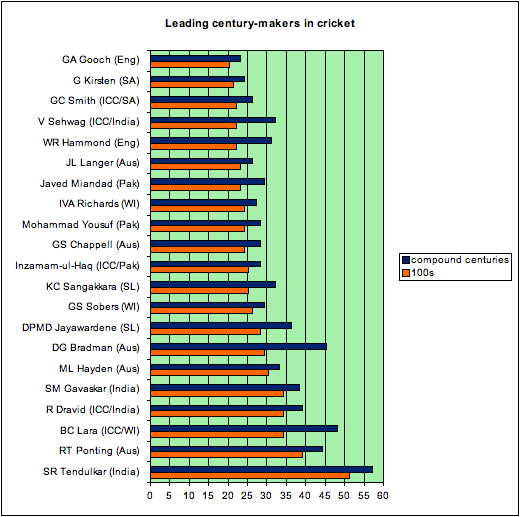 It could almost be a sport itself – debating who is the greatest sportsman of their sport / generation / all time. The great names are easy to think of – Pele, Federer, Bradman, Woods. Or is it Maradona, Laver, Tendulkar, Nicklaus?

The arguments will rumble on, but a few statistical caveats should always be kept in mind. One is: You can’t compare between sports very easily.

Here’s an example which has made me furious. In a recent issue of Prospect magazine, Jay Elwes tries to make the case for Indian cricketer Sachin Tendulkar being the best sportsman in the world. Fair enough, a good candidate I’d agree. But just read the following paragraph:

At which point, a question arises: can Federer, perhaps the greatest ever tennis player, be measured alongside Tendulkar? One instructive comparison is the distance by which each leads the trailing pack. Federer has won 16 Grand Slam tennis titles. In second place is Pete Sampras on 14, which makes Federer 14 per cent more successful than his nearest competitor. Tendulkar has scored a total of 32,803 runs for India in Test and one-day internationals combined. Ponting, in second place, has scored 25,769, meaning that Tendulkar has scored 27.3 per cent more again than his nearest rival. His lead is nearly twice that of Federer.

I’d like to say this is a small blip, but it’s not. It seems to be the main data to buttress his argument. What’s wrong with this? In no particular order:

I could go on, but you get the idea.

Cricket and tennis lend themselves to some fascinating statistical analyses. But this is not an “instructive comparison”. It’s grossly misleading, shows little thought, and does the debate about great sportsman no favours. Prospect magazine is a superb publication, but this is not one of their better articles.

Just a quick post to say that in all the statistics mentioned around Ricky Ponting’s time as captain of Australia’s cricket team, the most telling was this, made by Mike Selvey in the Guardian:

[Steve] Waugh, during 57 Tests in his five years as captain, introduced just six debutants to the side, and one of those was the greatest wicketkeeper-batsman who ever lived. Ponting has been in charge for 78 matches and in that time 32 players have made their debut.

The Ashes in stats

I was going to do this for this blog, but then got asked to do it for the FT. Here it is (registered).

The best nuggets include:

Other stats are even more painful – England took 30 more wickets overall – 86 to 56. In stats, whichever way you look at it, it was a very one-sided series. Strange that after 3 matches, it was 1-1.