Today, March 9, is national no-smoking day (in the UK). Coincidence or not, it has also been announced that tobacco displays will be banned in shops, with the further possibility that cigarettes could be sold in plain packets.

Will this debranding help cut smoking? Because that’s what we want to do, I assume. Without an outright ban on smoking, which is still seen as a step too far, making smoking harder to do and less attractive to buy is the next best thing.

Leaving aside the costs of removing tobacco displays and other marketing bits and bobs, is this helpful? To understand what’s going on, we need to look at what has happened to smoking rates in recent years. The most recent ONS data is from 2009. (See sources at the foot of this post). 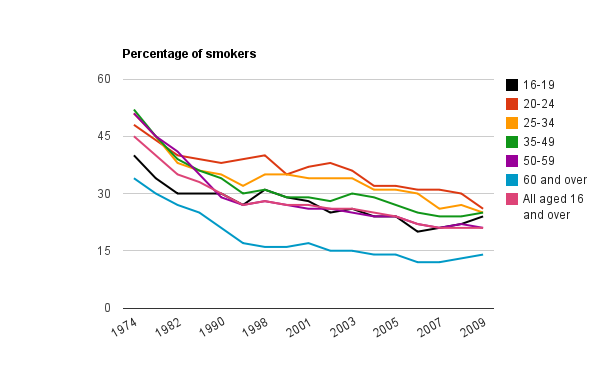 Basically, as seen in the chart above, it’s been on a downward curve, albeit one which has recently stalled. The downward curve is good news. The stall is not. Either the stall is temporary, or we have hit the ceiling (or floor, depending which way you look at it). The data is partial – 4 year intervals up to 2000, but you get the picture.

But dig deeper into the numbers, and you can see that, actually, people are still giving up smoking. All except one group: 16-19 year-olds. (Well, with a few blips here and there. There’s been a slight increase amongst the 60+ too.) 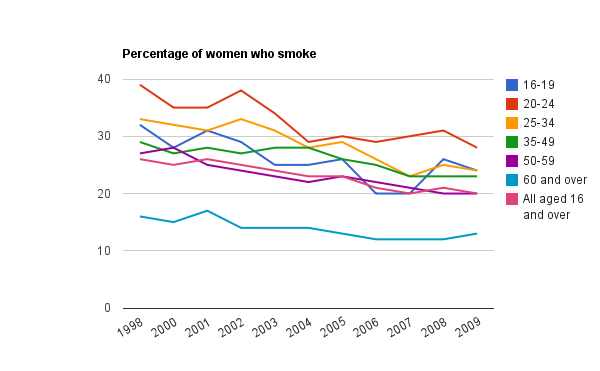 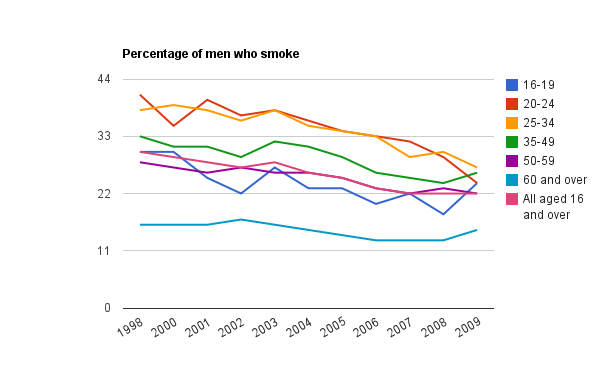 There was first a jump among women aged 16-19, and then the following year among men. (Trying to impress? Sounds familiar. Anyway…)

The uptake among 16-19 year-olds may be attributed to all sorts of things: rebellion, lack of education about smoking-related illnesses, doing the opposite of what your non-smoking parents do, fashion. Who knows? Even if you could ask every teenager in Britain, they would probably lie anyway*.

So: is debranding cigarettes a good idea?

FOR: teenagers are brand-aware, impressionable, and irrational. Removing tobacco imagery, with it’s intriguing logos and cool branding can only help. If you want to reduce smoking in the group where it’s on the increase, removing branding is a good move.

AGAINST: if there’s one thing that guarantees some level of intrigue and “cool”, putting things under the counter and in groovy plain brown paper is it. Teenagers will love the speak-easy status of cigarettes, the added bit of mystery. Brands aren’t really cool – teenagers are, and the whole no-logo thing will only help.

Sadly, I have no data to back any of that up. I’m sure there are tons of marketing studies that could prove it either way. The only measure will be whether smoking decreases or not, and as I mentioned before – statistics tell only what people are doing, not why.

* I was a teenager once, and I lied about stuff.