In all the hoopla surrounding the Goldman Sachs investment in Facebook, one thing seems odd.

It isn’t the money – Facebook made $2bn in revenues last year, apparently, which isn’t bad (although we need to remember that revenues aren’t profit – finance 1.01).

And it isn’t the ambition – Facebook is making itself the de facto log in for half the web. Nor is it platform issues: people look at Facebook on iPhones, Android phones and so on.

Facebook is first and foremost a network. And the laws of networks mean that the more people join, the more useful they are, and the more connections are made. It’s exponential – just think of the moment when 2 people are on a network, and a third person joins – the number of possible connections doubles each time.

Now look at these charts – they are from Wolfram Alpha, who use Alexa as their source.

But the traffic doesn’t:

You would think that the traffic would mirror the user growth. In fact, given the network effect, it should outpace it.

So what’s going on? Either Facebook’s new users are dud accounts, or the older users are getting tired. People are either spending less time on the site, or are turning up less frequently. According to Alexa, the time on the site is relatively static too, but the daily pageviews per user are falling: 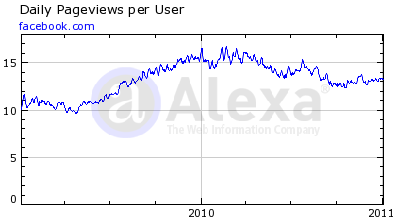 But this should be a worry for the company. They aren’t in the business of charging users, and may never be if the right revenue model comes along. So usage is everything. Facebook’s growth may seem relentless in terms of the numbers of people signed up, but boredom is a very dangerous thing for a network. When was the last time you logged into MySpace?

Goldman may have made a great investment, or they might just be turning up to the party as all the cool people are leaving. We’ll see.

Predictions for 2011 and beyond

The Ashes in stats