I’m getting very annoyed with the phrase “such as…” in journalism. It’s becoming a lazy substitute for not having concrete facts, and is used especially to write about websites and  social networks where the writer usually has no idea what they are talking about.

From the Telegraph: “Teachers believe social networking sites such as Facebook and Twitter are to blame for pupils’ poor grades, a study has concluded.”

From the FT (see, I’m not biased): “Banks are searching out fresh ways to engage with customers on social networking sites such as Facebook and Twitter as they look to capitalise on the growing popularity of these mediums…”

I thought the other day – if I had a pound for every time I saw that written… So I googled it. Over 9 million instances of that exact phrase. And then I got curious. What about the other combinations. LinkedIn and, say, Orkut? Why should Facebook and Twitter be the only show in town?

So here’s the grid: 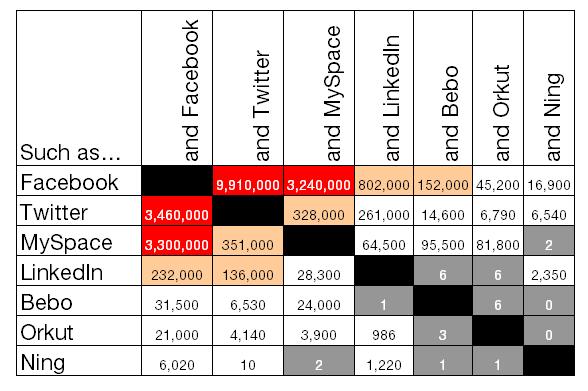 Source: Google results for exact phrase “such as x and y”. Here’s the data.

But the real joke is that Twitter and Facebook are so radically different. To lump them together that often in a lazy format is ridiculous. The network effect of journalists is not far removed from the network effect of social networks, or software, or other monopolistic services. Once everyone starts to say “such as Facebook and Twitter”, there isn’t much point in bucking the trend.

The limits of sports stats: the example of Nadal and the WSJ