I’ve seen a few references to a study on big cities and congestion recently, so I thought I’d take a closer look. It’s a survey by IBM – so caveats aplenty are needed. For starters, it’s based on a sample. And that sample is based on perception. (Perception is a good measure for some things, like happiness or success. It’s not so good for things you could actually measure, like travel times or car density or delays.) It also refers to lots of interesting auxiliary questions but gives no data in a usable format. Not very transparent, and weak for a company that you might think is data-savvy.

Anyway, at first glance, it’s quite easy to see where the congestion is: the Bric countries plus Mexico and South Africa. I’ve dumped all the available data into a Google Fusion table. The cities with a score over 75 out of 100 are the red markers. So is this a developing-country issue? Poorer countries don’t have the infrastructure, hence the congestion. QED.

But actually, is this a population issue? Perhaps the bigger the population, the harder it is to move people around, and the more congestion you get.

Without wanting to commit the classic correlation vs causation mistake, here’s the data plotted to population. (The population data is from Wolfram Alpha, which uses these sources.)

Although there isn’t a perfect correlation (score is 0.56), there is a basic grouping in the bottom left corner (lower population, lower congestion) and top right corner (with high for both). 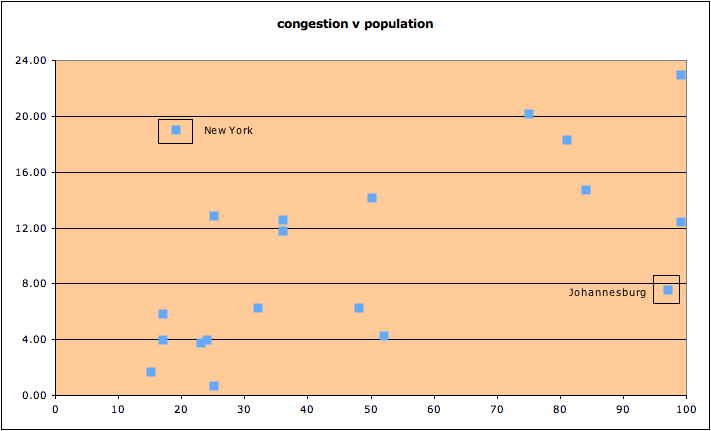 Upshot: New York is a good place to live, Johannesburg not so. Assuming that there are benefits to a big city such as interesting things to see and do.

Omissions: Why did they leave Tokyo out? It’s a) huge and b) hard to navigate. It would have been interesting to see what the congestion perception was there.

The crazy cost of Switzerland