Why Alastair Cook’s record is no big deal 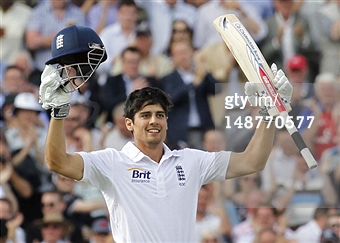 In all the celebration of Alastair Cook becoming England’s most prolific scorer of centuries, one thing occurs. Despite all the “how far could he go” conjecture, it’s just not that a big deal.

Yes, he’s a very very good batsman. But without wanting to kill the party dead, just look at the overall list. There is only one of the big test playing nations which has a lower all-time century scorer: New Zealand. Need I go on?

OK, put it another way. Cook’s 23 tons puts him equal fourth on the India list, and joint seventh on the all time Australia list for century scorers.

Is the list skewed by more test cricket in recent decades? Not really. Cook would also be 4th on the West Indies list, behind Viv Richards and Gary Sobers, as well as Brian Lara.

If Cook was from Pakistan? Third on the list. South Africa? Third. Sri Lanka? Without wanting to get repetitive – third. So of all the big test nations, bar New Zealand, he wouldn’t even be in second place.

In essence, the England centuries record of 22 was always there for the taking. The fact that it had stood for so long was a strange anomaly, and could easily become a fluid thing for a while with Petersen only one ton behind.

Cook is terrific, on a great run of form, and will be a run machine all-time great. But this isn’t the record to get that excited about. Table below the break…

{in pictures} Flintoff: a winner, then and now

5 reasons why the word ‘phablet’ won’t catch on