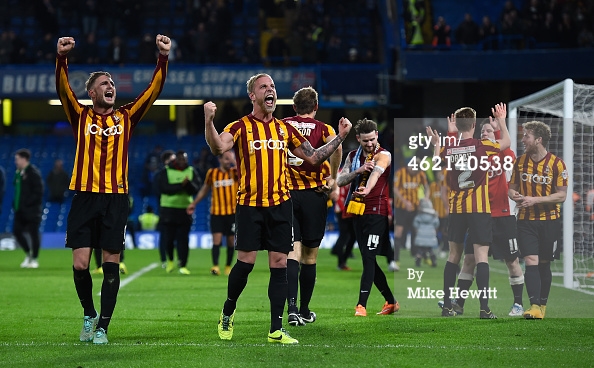 What’s the biggest FA Cup shock defeat ever? For Robbie Fowler, it’s the Chelsea 4-2 loss to Bradford from yesterday (Jan 24). And in terms of drama, it’s clearly a great story. After all, Chelsea were 2-0 up and at home.

But for league placings, it’s not even close. With Chelsea top of the premiership, and Bradford 7th in League 1 (the third tier, despite its name), there are 39 teams between them.

Compare that to the 84 teams between Blackburn and Oxford in 1964, which according to Steve Porter, author of The Giant Killers website is the greatest FA Cup upset ever. Blackburn were 2nd at the time in the top division; Oxford were 18th in league 4.

Porter, who writes under the name Captain Beecher, ranks the upsets in terms of league placings, combined with a player quality metric using internationals and previous cup winners. Porter doesn’t spell out his methodology, but it’s clearly better than just using collective memory and non-scientific lists published in newspapers.

Porter sums up the problem perfectly:

On BBC’s Match of the Day programme, when asking the public if Bradford’s victory over Chelsea was the greatest cupset ever, they showed twelve of what they considered the greatest giant killings of all time. Every game had one thing in common. The BBC TV cameras were there. Not one game which was not covered by the BBC was considered. And so shapes our opinion. If you’re told something was a huge giant killing enough times {7th placed top flight Wimbledon beating Champions, Liverpool 1-0 in 1988. Surprise? yes but giant killing? Really? 7th vs 1st in the Premier League?} You start to accept that it’s true. ITV are a little more impartial, perhaps because they don’t have as much cup footage to be able to make lists exclusively thiers. The problem when compiling such lists is that every time a particular tie is overlooked, it’s chances of being placed in the next TV countdown, or magazine article diminishes.

And where does Porter’s system put Chelsea-Bradford? It’s 15th on his all-time list. Not bad, but it is interesting that it is lower down than non-league Luton’s 1-0 victory over the Premiership’s Norwich only 2 seasons ago, which is in 7th place. That didn’t even make the BBC’s list in the studio analysis. Memories are short, eh?

Being subjective, turning round a 2-goal deficit to 4-2 at Stamford Bridge is an extraordinary result. But perhaps the BBC could, with all its resources, dig up a few proper stats like Porter’s.