As the cricket World Cup kicks off, this excellent statistical-based tour of the history of One Day Internationals by Andy Bull of the Guardian is really worth a read.

These days the cut-off for a century quick enough to rate a mention in the ODI record books is 79 balls. Any slower than that, and you can’t make Cricinfo’s list, else it’d get so long that they’d have to stretch it to a second page. Wadsworth’s innings doesn’t even come close. As it is there are 91 innings on the list, running chronologically from Zaheer Abbas’ hundred off 76 against Sri Lanka in Lahore, 29 March 1982 through to Ross Taylor’s hundred off 70 against Pakistan at Napier just the other week. Of those 91, 44 have been scored in the last eight years, since the first World T20 in South Africa in September 2007. There have been 946 ODI matches in that time, out of 3,598 overall. So, to put it roughly, the last quarter of ODI fixtures have provided half of all the fastest centuries.

Of course bowling and fielding have evolved through T20 too. But even with the advances made there, the batsmen are running away with the game. It was 31 years before the average ODI run-rate for a calendar year first crept up above five. First happened in 2005. The median average for the last 18 years (since they first started playing more than 100 ODI games a year) is 4.88. Since the new fielding regulations came in, it has gone from 5.05 to 5.11, to 5.29, to, so far this year, 5.38. It’s leapt up by a full third of a run per over in under three years. Also, in 2013 more hundreds were scored than in any previous year of ODI cricket, the number of balls per six dropped to a record low, and the collective strike rate rose to a record high, crossing 80 for the first time. Then, in 2014, every single one of those records was broken all over again. All this despite the fact that neither year came close to breaking the records for the number of matches played, or balls faced.

Great stuff. But I think it needs a chart, for the run-rate. Here IS that chart (data from Cricinfo): 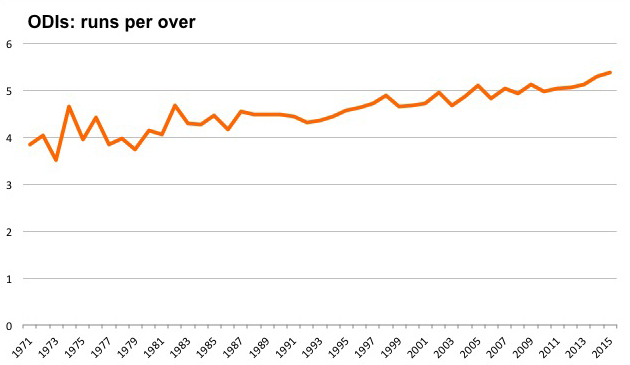