Sport Geek #41: What Trump and Leicester City have in common 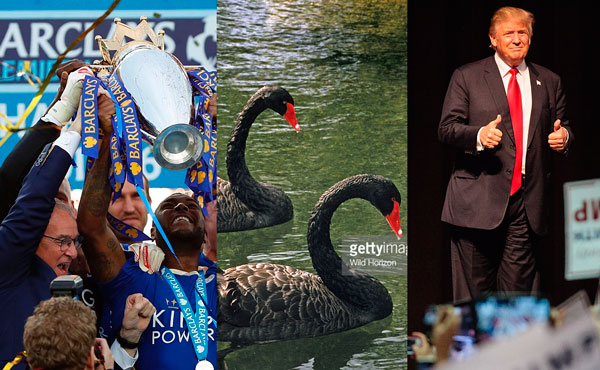 Perhaps we should all just go and re-read the Black Swan.

Leicester City’s Premier League triumph and Donald Trump’s road to the GOP nomination may seem like strange things to compare, but they are probably the two most unlikely major things that have happened this year.

These were not simply one-off unlikely single events. They are long-run wins, persistently written off by the media until they were a near certainty. Now both events are seen as game-changing: Trump has “already changed US and world politics… Themes and ideas that were on the fringes have now entered the political mainstream, and they will not disappear if and when Mr Trump loses”, according to the FT’s Gideon Rachman. Leicester have shown how “every club in the league now has the financial capacity to compete” according to the Telegraph.

The odds were both ridiculous for a limited field. There are 20 Premier League teams: for one to be 5000-1 to win the title is extreme, as was Trump’s 2 per cent chance given by FiveThirtyEight.

What comes next? Here the contrast is stark. Most neutrals hope that Leicester can have a decent-to-good run next season, while hoping that Trump’s campaign at best stalls, or preferably implodes. The tragic outcome would be the reverse.

And so to the matters of the week.

Vinnie Jones as Nigel Pearson? Marina Hyde looks at the Hollywoodification of Leicester City.  Meanwhile, the team was old, hadn’t been together long, didn’t cost much and wasn’t very cosmopolitan. How did they do it?

Equally perplexing to anyone under 50: why did England win the World Cup in 1966?

Everyone loves the whole best-team-of-all-time debate. So, baseball first: here’s FiveThirtyEight on the best MLB team using the Elo method. And here’s an basketball stats take via medium on the best NBA team as well.

Something more off-beat. A letter to every NFL rookie, to read before it’s too late. Strong stuff.

Aussie tennis is always has a fraught media-players relationship. Bernard Tomic gets a proper roasting in the SMH: “heart the size of a peanut, no ability to guts it out”. Ouch. (h/t Jon Wertheim)

Who doesn’t hate a golf cheat? So, political stripes aside, here’s a brief history of Donald Trump cheating at golf.

It’s just a number, but as Alastair Cook himself puts it, “You can’t really argue with a bloke who’s scored 10,000 runs”

If golfers aren’t going to take the Olympics seriously, then what’s the point?

Russian athletes took drugs at Sochi (allegedly). Why am I not surprised?

Damn those tricky millennials. The running boom is so over.

That’s it. Here’s to a Trump presidency.