Are Australia now too nice to be cricket winners? The run rate suggests so…

Here’s a thought to enrage a few alpha Aussies. Apparently, the Australian cricket team have become too nice.

This is the team that pioneered “mental disintegration” of the opposition; whose hard-nosed captain Allan Border declared that he would “rather be a prick and win”; the team of Michael Clarke’s “get ready for a broken fucking arm“. Nice? Nice?

Apparently so. According to an article in ESPNCricinfo, Australia have an identity problem, the current captain, Steve Smith, said that his team was at times too quiet and lacks energy.

Smith was quoted as saying:

“We’ve got some pretty quiet characters, so even if it’s not making noise verbally, it might be just about having a bit more presence and the old Australian way of puffing your chest out and making your presence felt for the quieter guys. It’s trying to do that, get into the game that way and try to provide some sort of energy that way.”

How does that translate on the pitch? It’s hard to measure attitude or hostility, especially in fielding and bowling. Maidens and wickets don’t reveal whether they were taken with guile or brute force. Catches aren’t graded on alertness.

But there is one measure that shows the attacking intent of a team: the run rate. Aggressive teams score fast. The Australians had a reputation of scoring hard and fast to put the game out of reach, and deliberately targeted opposition bowlers. If we want a proxy for hardness, this isn’t a bad place to look.

Of course, it’s is not a perfect measure – run rates can be influenced by the pitch, the opposition, the prevailing style of umpiring (restricting bowlers), and the match situation.

Still, it’s interesting to look at the run rate under successive Australian captains. I have averaged it over a rolling 10 innings to smooth out the effect of some of the factors above. What does it reveal?

(I’ve rolled Adam Gilchrist’s matches in charge into Waugh and Ponting’s figures – he was only captain for six Tests, rather than a long-term appointment.) 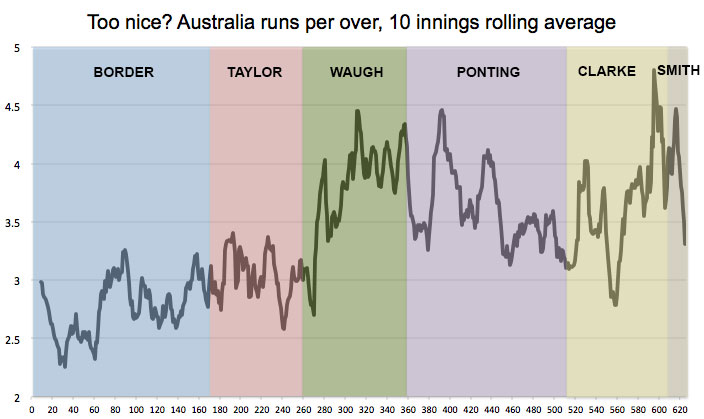 What can we see?

Essentially, the massive change is from the Border-Taylor era to Waugh-onwards. That’s where the run rate goes up from around 3 per over to 4 and above. That’s the equivalent of an extra 90 to 100 runs per day scored, which is a big difference in terms of finishing games off rather than getting a draw. Waugh took Australia from hard to beat to utterly ruthless – and the run rate shows.

Under Ponting, the run rate starts to drop. When Clarke took over it had hovered around 3.5, and was getting close to 3. Clarke then presides over the greatest swing, from under 3 to over 4.5, and back to around 4, partly as the team’s fortunes swing from series whitewash to series whitewash, both victories and losses. As nice vs nasty goes, Clarke’s most comprehensive wins came when fast bowler Mitchell Johnson was at his mustachioed best.

And now under Smith, the rate is dropping fast again. The current decline under Smith is from 4.4 to 3.3 in just 10 innings – the most consistent drop on the chart.

While a lower run rate might not be conclusive proof of being too nice, you can certainly see that under Waugh the Australian Test side was a run machine. And under Smith, there is clearly a problem.

Perhaps the question is better rephrased: not whether nice teams can win, but whether winning teams are ever seen as nice.