The 10 best sports graphics and data visualisations of 2016

It’s year-end journalism time! My non-scientific round up for 2016 of the best sports graphics… drum roll please.

THE WINNERS (I couldn’t decide between them) 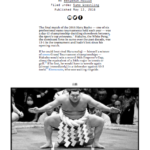 The Sumo Matchup Centuries In The Making
By Benjamin Morris
Publisher: FiveThirtyEight
A beautiful history of Sumo wrestling. Stunning photos, great charts – this is a model of modern data journalism coupled with great writing and presentation.

The NFL Draft
By Tim Meko, Denise Lu, Bonnie Berkowitz and Lazaro Gamio
Publisher: Washington Post
The NFL draft is a whole sport in itself: some teams play it far better than others. The WashPo nails a mix of interactivity, user input (pick your team), long-scrolling with story-telling to amazing effect. It’s not a “beautiful” graphic, but instead a whole application delivered brilliantly. Quite amazing.

AND EIGHT GREAT OTHERS 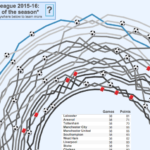 Premier League 2015-16 – the story of the season
By Neil Richards
Publisher / Platform: Tableau
Not mobile-friendly, but a great way to replay the 2014-15 season. Interactivity that’s integral rather than gimmicky. And it even has managerial sackings!
Notable mention: see also the FT’s rise of Leicester.

Perfect, Freaky Olympic Bodies
By Joshua Robinson, Paolo Uggetti, Siemond Chan and Mike Sudal
Publisher: Wall Street Journal
One of a great crop of Olympic graphics this year, this had no interactivity at all – just a very arresting set of images delivered with great style, looking at some extreme types of Olympic physique.

How Nafissatou Thiam beat the odds to claim the heptathlon gold in Rio
By Niko Kommenda, Apple Chan Fardel and Monica Ulmanu
Publisher: The Guardian
A lovely interactive graphic, coupled with photos and a great story to show how the heptathlon was won. Thiam needed the performance of a lifetime to steal the crown from the favourite. A good example of clean graphics enhance what would otherwise have been a great story in any case. 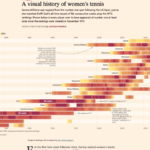 A visual history of women’s tennis
By John Burn-Murdoch
Publisher: Financial Times
This is how to do sports history. Brilliant. (Disclaimer: I’m a colleague and friend. But this is really good).
Notable mention: The LA Times on Serena Williams – a visual tour of her greatness.

Every shot Kobe Bryant ever took. All 30,699 of them
By Joe Fox, Ryan Menezes and Armand Emamdjomeh
Publisher: LA Times
Weirdly compelling, slightly unnecessary but fantastic all the same. Title says it all.
See also: Stephen Curry’s 3-Point Record in Context by the NYTimes

The current All Blacks are the most dominant rugby side ever. Why?
By James Tozer
Publisher: The Economist
Not visually arresting like others in this list, but a great statistical take on the All Blacks’ rugby dominance, and it has one chart that says it all. 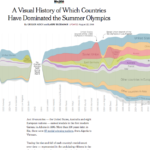 A Visual History of Which Countries Have Dominated the Summer Olympics
By Gregor Aisch and Larry Buchanan
Publisher: New York Times
No list would be complete without something from the NYT, and this is a great visual history. Charts that you will just love. Brilliant. See also: the interactive medal chart. Accept no others.

There were some other great NYT graphics on Phelps and sprinting, for instance. But sticking with my rule of one per publisher, the last-but-not-least spot goes to…

Most Unlikely Comebacks: Using Historical Data To Rank Statistically Improbable Wins (in the NBA)
Publisher: Polygraph
This is just so well done, I love it. I just think you should see it.

So there it is folks. The best of 2016, completely subjective, as compiled by me. You may have your own favourites that I’ve missed, so please add in the comments. But there’s nothing at stake here, just great data journalism to enjoy.

Winners will (probably) get a copy of my book – I know, I know. But it is worth a read.

Sport Geek #64: The goalkeeper and the three bullies