Britain’s voting system is delivering what the public want

June 12, 2017 / rob / Comments Off on Britain’s voting system is delivering what the public want

Hello hung parliament: Britain is back into deals and power arrangements, after just two years of Conservative majority. Another election in 2017 is a possibility if things fall apart.

The question I want to explore is this: is the first-past-the-post system (FPTP) delivering what voters want?

FPTP is one of the main criticisms of the UK political system. Each MP just needs to win the most votes in a seat, which can mean that they need to win far fewer than half the votes to be elected. That means smaller parties can pick up lots of votes, and get no seats, and results are skewed towards the winning party.

The most egregious example of this is the UK Independence Party – UKIP – in the 2015 election. With 12 per cent of the overall count – 3.8 million votes – they won just a single seat. FPTP clearly screwed UKIP in 2015.

This is nothing new. The Liberal Democrats have always suffered in this way, and their manifesto invariably contains a section on voting reform, moving to systems such as single transferable vote.

Whatever the merits of other systems, the question for the British people is not just about smaller parties. Does FPTP skew the result towards one or both of the two main parties, Conservative and Labour?

To assess whether FPTP is delivering an unfair outcome, the best measure is to look at the percentage of seats won compared to the percentage of votes won. This takes into consideration the different number of seats available in each election, and (importantly) voter turnout.

A perfect system would deliver a score for each party of 1. That would mean votes translate into seats at exactly the same rate. A score above 1 means the party gets more seats for their votes; a score less than one is the opposite, the party gets fewer seats per vote.

Some smaller parties lose out – that’s clear. Others do better – the Scottish National Party have in the last two elections got around 1.8 – in other words, close to twice the seats that their vote share suggests. Sinn Fein, the DUP and Plaid Cymru have also all scored above 1. The lesson is that smaller parties do well if their vote is concentrated in a region, rather than spread out over England.

But I think the bigger issue is whether the main parties are getting seats far out of proportion. That’s a more alarming question, as it has far greater impact on whether a party can force through legislation that half the country doesn’t want. 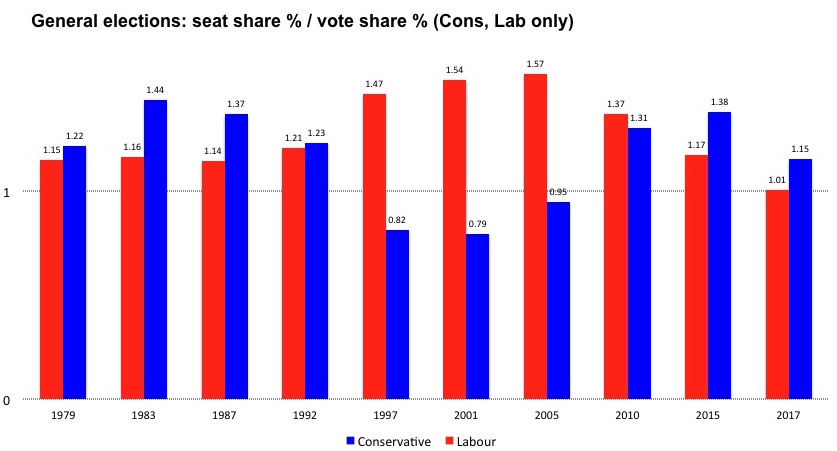 The latest election has in fact delivered the fairest set of results in the last 40 years (looking at the last 10 general elections). The Conservatives got 1.15 seat share per vote share; Labour got 1.01. This is the only time in the data that I’m looking at that the winning party was below 1.2. FPTP is not the problem here in terms of delivering voter intention. In fact, a hung parliament is exactly reflective of the votes cast.

The worst years for FPTP skewing the results were in fact the New Labour victories of 1997, 2001 and 2005. The Labour scores for those years were 1.47, 1.54, and 1.57 – in other words Labour got around a third more seats than the votes suggested they should. The second-place Conservatives were below 1 for all those three elections.

The 2015 election saw the Conservatives benefitting from FPTP with the highest score since the Thatcher years: 1.37. But Labour were still getting a score over 1 as well.

The upshot of all this is that Labour clearly benefits from the FPTP structure better than the Tories, never more so than under Blair. The constituency boundary changes that are proposed by the electoral commission may not come into effect if there is another election this year. Which is good for Labour – they were the party that was to lose out the most by the rejig, and would make it harder to translate votes into seats, and reduce their score.

If another election is to take place in 2017, the benefit that Labour gets from FPTP means that coming second is less damaging than it is for the Tories. Yet another hung parliament is on the cards, unless Labour can make another seismic shift in votes. In the meantime, the case for electoral reform is weakened – why change a system that generally reflects voter intention?

First past the postGeneral Electionpolitics

Sport Geek #75: the case for legalising drugs in sport

Numbers, racism, terrorism and the media: why we can’t get it right