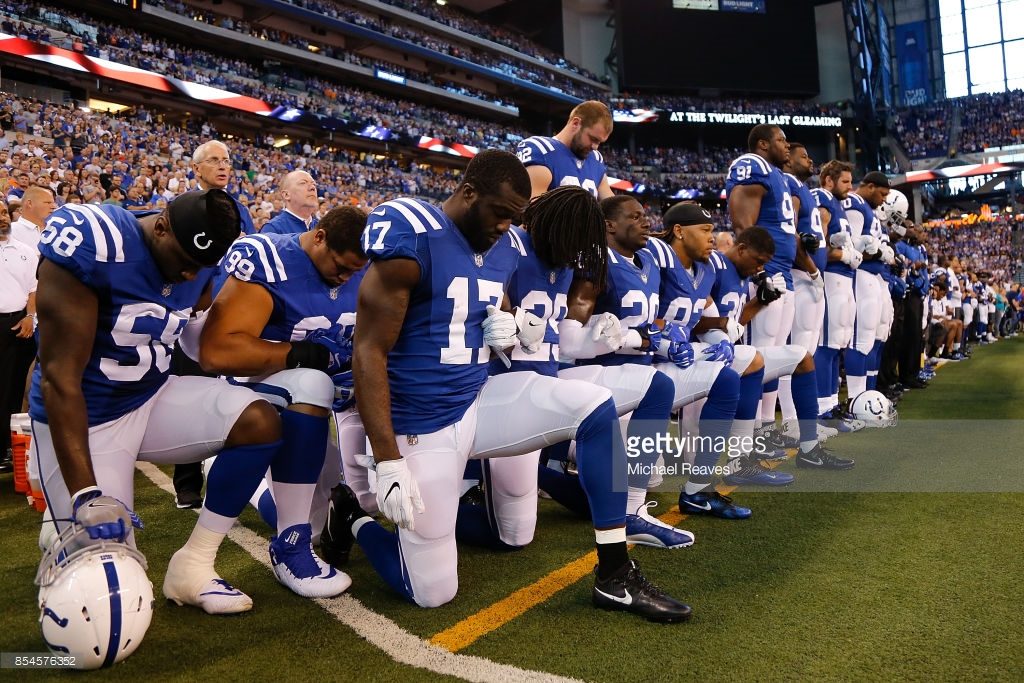 Here are six thoughts on the Trump vs Sports saga.

Another day, another unbelievably offensive tweet. Trump just keeps on. The question is, at what point does this go from appealing to his core, to putting them off? Greg Popovich asked that question brilliantly. Love Greg.

If I was an NFL owner, and my team needed a QB backup, I’d sign Colin Kaepernick in a heartbeat. He’s got the tools. Half the league has gone down on one knee now, so surely his brand isn’t that toxic any more? It could be a tactical and marketing masterstroke.

Imagine this in the UK. You can’t. Why not? Well, we don’t ram the national anthem down everyone’s throats every match. Internationals, yes. Premiership games, no. (And our police don’t shoot black guys all the time.) America could do itself a favour by toning down the flag-patriotism-God-on-our-side rhetoric. But it won’t.

The NFL is in a bind. The players are mainly black. The fans are largely white, and right-leaning. The boos at the knee protests are awful. ‘Those uppity black guys disrespecting the flag!’ Owners have taken their players’ side for now, but for how long? If this gets ugly, with crowds staying away and ratings down, how could they reverse the tide? Fire the whole team, as Trump would prefer? That’s not going to work. Their only hope is that it blows over. That’s unlikely – this started over a year ago and is just getting a head of steam. In most sports, the fans and players have a bond; in the NFL, the bond seemed fairly weak in the first place. Now?

The NFL has bigger long term problems: head injuries, fewer kids playing at school, tactics that have made the game a bit dull (short passes in particular), the rise of soccer. This race row isn’t a sport in crisis. It will however distract the league from those other problems, none of which are going away.

At the heart of all this is the utter stupidity of America. A protest about racial injustice (equality and justice being core American ideals) has been morphed into disrespecting your country. I’m not sure if this is alt-right mendacity or just white blood dumbness. Either way, Americans have shown themselves up again. It makes Saudi Arabia look enlightened (hey, women can drive now!).

Trash talk – sports does it better than Trump.

This story was fading until Trump gave it a shot in the arm.

This might be mainly about the NFL, but LeBron James has been the most eloquent.

Not heard of the Laver Cup? Well, it’s how the Davis Cup should be.

Rafael Nadal is not just the king of clay.

Sloane et al – are we about to see a US revival?

The rebirth of Leeds United.

It’s raining penalties in the Champions League – but what’s behind the increase?

Sport Geek #81: booze, Bills, and the curse of brilliance