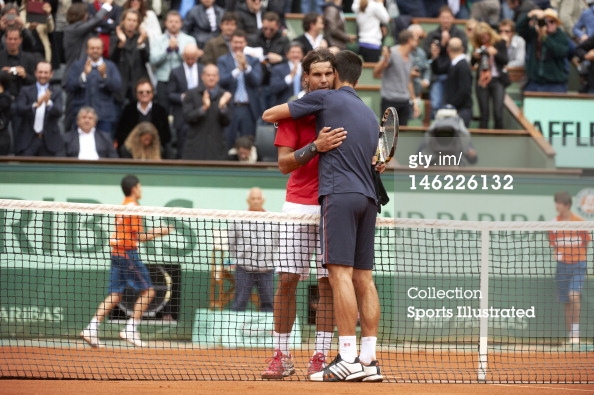 Tennis thrives on great rivalries – they are almost more famous than the players themselves. Borg-McEnroe, Sampras-Agassi, Federer-Nadal.

But the current rivalry between Novak Djokovic and Rafael Nadal may be the best ever. Here’s the killer fact why:

They are the only pair (in the men’s game) to have contested each of the four major finals. No-one else has done that – not any of the rivalries I mentioned at the start, nor even any of the pre-open era rivalries such as Laver-Emerson.

Why is that important? Well, it shows that they are both hugely talented on all surfaces, and have stamina to get to many major finals. And although this Friday’s meeting at the French Open is a semi rather than a final, due to Nadal’s ranking slipping after a long injury, who would bet against them overtaking the record of eight slam finals held by Federer-Nadal?

Which makes you realise how many finals Nadal has played against Federer and Djokovic – only three of his 16 major finals have been against other players (Soderling, Berdych and Puerta, winning them all).

The BBC (wrongly) stated that: “The Monte Carlo final [earlier this year] was the pair’s 34th meeting, making their rivalry the most prolific in the modern game, with Nadal leading 19-15 overall and 12-3 on clay.”

Update: the BBC updated the story, thanks to Piers Newbery.

Not quite. Lendl and McEnroe played 36 times. But that’s just another milestone soon to be passed by Nadal-Djokovic. Only injury can prevent them breaking several more records.