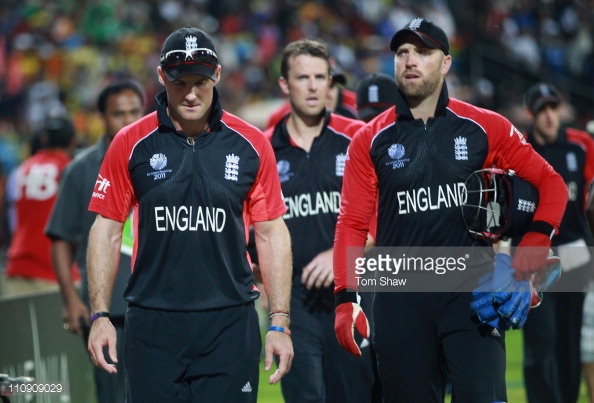 It was true. It’s not any more, yet it’s a myth that’s still doing the rounds. A recent version comes from retired Sri Lankan spin bowling legend Muttiah Muralitharan. In an interview with the Telegraph, he says:

they [England] don’t play enough one-day internationals abroad like other countries. We play 30-35 one-day matches in a year but England play about 14 or 15, so that is not enough. They play more Tests and that is why they are good in Tests, but they think domestic matches are enough to experience one-day cricket. It is not.

Murali is spot on, if you look at 2012. That year, England played 15 one-day internationals (ODIs) compared to Sri Lanka’s 33.

Of course, it was very much the case that England played way too few ODIs to be competitive. In cricket, just as any other sport, results are key. But you also need experience, and simply being less exposed to the 50-over version of international cricket is going to hamper you when it comes to performing at the World Cup.

From 1992 to 2002, England played the fewest ODIs of any of the major cricket sides (I’m not counting Bangladesh or Zimbabwe in this analysis).

Think about this from a player’s point of view. If you had started in the England team in 1992 (and didn’t get dropped or injured), it would have taken you until somewhere in 2004 to get 200 ODI matches under your belt. If you had played for India, your 200th cap would have been in 1999, a full 5 years earlier. India play the most ODIs, so let’s compare to other teams. The next slowest to 200 caps would have been from New Zealand and the West Indies, with their equivalent players getting their 200th cap in 2001, a good 3 years earlier than our English player.

But since 2003, that’s all changed. In the 12 years since 2003, England have played far more one-day cricket, more than South Africa, New Zealand, and the West Indies, and not far behind the others. In that time, an ever-present player would have picked up 273 caps; an Indian player could have accumulated 350 caps. The gap has narrowed.

The four year rolling chart (below, click for full size version) of ODIs played says it all. England scrape along the bottom until 2003, but have picked up since and play a comparable number of ODIs to the other major teams. I have used the rolling four-year chart as the year-by-year version has too many ups and downs to illustrate the trend of matches played. Also, four years is a good time period, as it fits with the World Cup cycle. 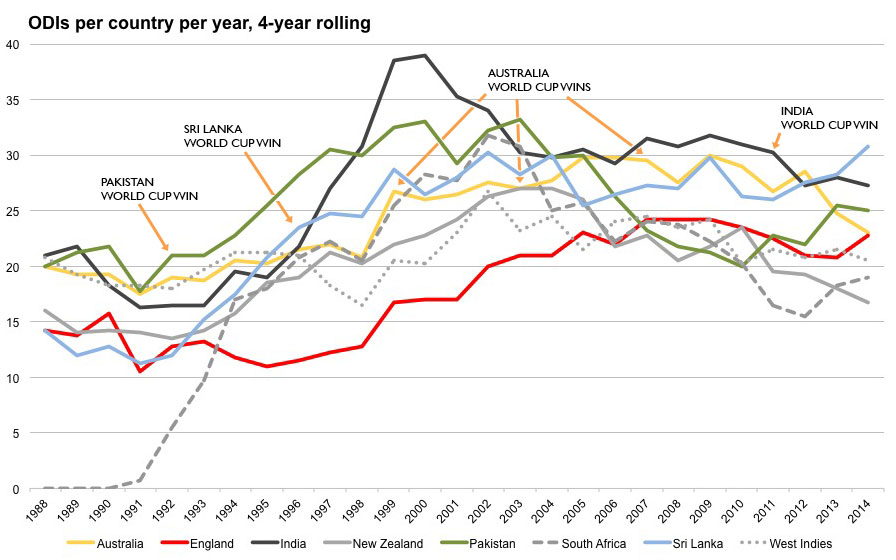 Of course, the teams that play the most don’t always win the World Cup: Australia have shown that. But in the case of Pakistan, India and Sri Lanka, as well as the 2007 Australians, their World Cup wins came after a four-year cycle of being one of the top two teams in terms of matches played. Experience isn’t everything, but it clearly helps.