The cricket World Cup usually has a pretty dull round of opening matches, but Chris Gayle has done his bit to keep things interesting. His (World Cup record) knock of 215 has been rightly praised and analysed – I won’t go into detail here.

However, it is not the highest One-Day International score ever. And recent cricket records show that 200-plus scores could soon be more common.

Below are the progressive records for the highest Test innings, and highest One-day score.

If we look at the ODI highest-innings record, it charts an interesting course. Unlike the equivalent Test record, which quickly got to over 300 in the 193rd Test in 1930, and then nudged up to 400 over the next 1,500 matches, the ODI record shows the new, go-for-broke batting style of the last few years.

The charts below show the record not by years, but by international matches played. This is a better gauge than the date when the innings was made, as the frequency of cricket matches has accelerated over the years. (Just to illustrate: there were 266 tests played in the 1980s, compared to 420 in the last 10 years. Equally, there were 516 ODIs in the 1980s, compared to 1,385 played in the last 10 years. I have not included the T20 record as it is still early days in that format, internationally at least.) 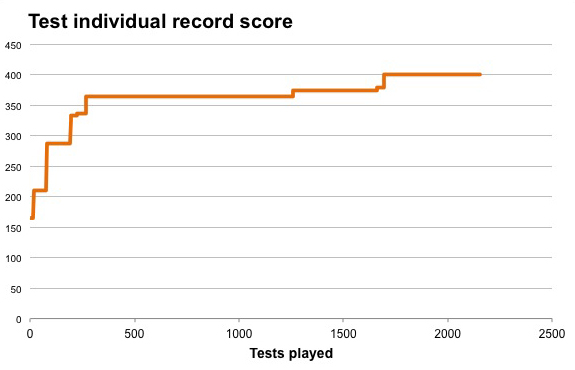 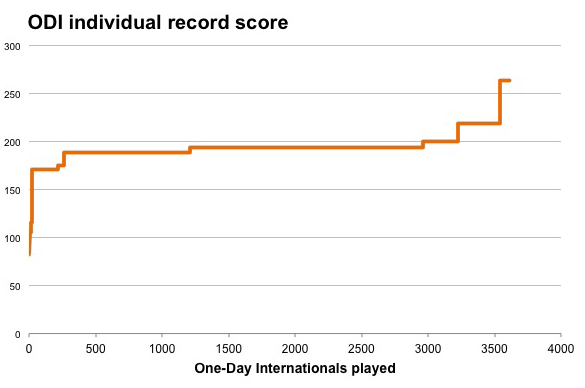 This is a reflection of new rules – the power plays which restrict fielders on the boundary, as well as a new breed of batsmen who play far more T20 cricket and have pushed the style of the one day format. Players such as Chris Gayle, in fact.

This seems counter-intuitive. The ODI match is restricted to 300 deliveries, whereas the only limit to a test innings is time. However, the Test record has stalled – partly as teams are now keener to push for victories rather than indulge a player who might rack up a huge score, which can often lead to a draw.

So how far can the ODI record go?

Theoretically, a player who hit every ball for 6, except the last ball of the over which is hit for 3 (so he can retain the strike next over) could score 1,653. However, a million ODIs could be played without that happening. More realistically, a player could face around 200 of the deliveries bowled – the current record of 264 by India’s Rohit Sharma was scored in 173 deliveries; the 1975 record of 171 by New Zealander Glenn Turner took 201 balls. If we took Sharma’s strike rate of 1.53 and applied it to 200 balls, that would be a score of 306.

However, a look at the ODI scores of 150-plus shows that higher strike rates are possible. Shane Watson of Australia hit 185 in just 96 balls in 2011. If we applied his strike rate of 1.92 runs per ball to an innings of 200 deliveries, that would result in a score of 380 or so. If we take into account the strike rate of the quickest ODI century – the recent record of just 31 balls was set by South Africa’s AB de Villiers hitting at over 3 runs per ball –  could 400 be feasible?

For that to happen, a lot of things would need to go right: short boundaries; a player of supreme power in luck and in form; poor bowling; and two in three deliveries to that one player. That’s a lot to ask, but the two individual elements (strike rate, number of deliveries) have both been achieved before, so this is not an impossible scenario.

We might even end up with a seemingly unthinkable situation: the ODI innings record higher than the Test mark. Still, a long way to go, as the chart below shows. 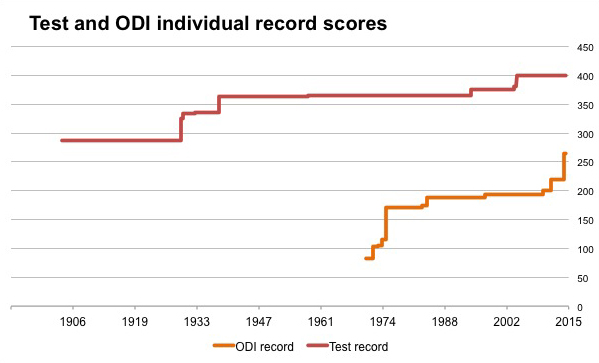